Lawrence Robert Finazzo went to meet his Savior on June 14, 2020. Born on July 6, 1944 in Erie, the son of John and Helen Finazzo, Larry graduated from Tech Memorial High School in 1963 with a Certificate in Drafting. He also attended Gannon University as well. He proudly served four years in the U.S. Navy as Classified Security Agent in Bremerhaven, Germany and two years in the Reserves. 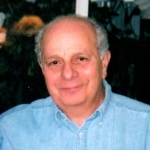 Larry was a proud family man who valued hard work, his love of God, and fondness for animals and gardening. His love of horticulture began with his childhood watching his father and uncles joyfully tend to theirs. Every year he would find his solace in each hundred-foot row. He worked relentlessly at his full-time job, concrete jobs at night and on weekends, and somehow made his way into the acre garden to ?relax?.

He began his post-military career as a draftsman for Fenestra Door and Frame Corporation and worked his way up to Manager of Purchasing for 31 years. When Fenestra closed in 1995, he was hired by James P. McBrier as Vice President of Sterling Railing where he helped grow the company exponentially until it’s sale.

In his ?retirement?, he also worked as a promoter and until his passing, a proud school bus driver for Northwestern School District. He was an active member of Cornerstone Baptist Church in Crossingville and previous member and Deacon at First Baptist Church in Edinboro where he leaves many friends that were like family to him. He also was a proud member of PROBUS Businessman?s Association and served on the board in various capacities.

He was preceded in death by his parents, John and Helen Taccone Finazzo; brothers, Rocco Finazzo and Jerome Finazzo; and sisters, Angie Young Finazzo and Joanne Finazzo LoPiccolo.

Funeral services will be private at Van Matre Family Funeral Home in Edinboro, and committal and burial will take place at Edinboro Cemetery.

In lieu of flowers, memorials may be made to Because You Care (www.becauseyoucare.org).