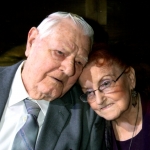 He was preceded in death by his parents, Lee and Zelda Leonard Yost; his wife of 70 years, Nancy Weaver Yost, who died on May 23rd; an infant daughter, a grandson, a great-great-grandson, a nephew, and five brothers and one sister.

Most people will remember Victor’s smiling face as they did their grocery shopping at Yost’s Market in Wattsburg, which he owned and operated for ten years.

Private funeral services will be held on Sunday, June 21st at Harmony Baptist Church in Waterford. Burial will be in Sunnyside Cemetery, Centerville, PA.