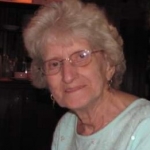 A longtime member of McKean United Methodist Church, Dolores quietly and graciously served there in many capacities over the years. First and foremost, she was a homemaker, or “domestic engineer” as she would describe, and loved being a mom. Cooking, baking, decorating cakes, canning, freezing, and dill pickles were all perfected by Dolores. For many years she worked cleaning houses and businesses where she made many lifelong friends. And, of course, she was a partner for her husband, Joe, in operating the family farm.
In addition to her parents and husband, she was preceded in death by two sisters, Sennie Widdowson and Shirley Eliason; and two step-daughters, JoAnn VanCise and Marjorie McNabb.

Family and friends are invited to gather for viewing at the family farm on Van Camp Road in McKean on Sunday, August 16th, from 2-4 p.m., a funeral service at 4:00 p.m., and then a meal following. A private funeral service will take place at McKean United Methodist Church on Monday with burial following at Erie County Memorial Gardens. Pastor Barb English will officiate.