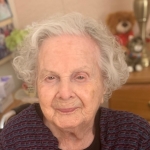 It is said that love makes the world go ?round. Camille, during her 101 years, played a big role in its rotation. Through the years, Camille was passionate about the love for her family. She married her husband, Casmer, and was happily married for 71 years. They raised two sons: Richard (Phyllis) of Summit and Lester (Diane) of Waterford; and two daughters: Arleen (Frank Haibach) of Geneva, Ohio and Teresa (Wesley McGarvey) of North East.

Camille was preceded in death by her parents and nine siblings, and her husband, Casmer, on June 2, 2010. She is survived by her children and a brother and sister-in-law, Louis and Martha Malinowski, and a sister-in-law, Sophia Tryzbiak. Included are six grandchildren, nine great-grandchildren and six great-great grandchildren. Many nieces and nephews survive as well.

Camille was a devout Catholic her whole life. In 1936, with her husband and other parishioners, they helped complete the outside of St. Matthew in the Woods Roman Catholic Church by adding the stone surface. After that, the church became well known as ?the little stone church.? She spent years serving on the women?s church auxiliary and volunteered her time at the many fund raisers and festivals that the church held yearly. She was well known for her lemon meringue pies and she made many of them for church bake sales. When St. Matthew closed, she continued to attend All Saints Parish in Waterford.

Camille was happiest when she was in her kitchen preparing delicious meals for her family, and spending time every year canning and freezing the many fruits and vegetables that she and Casmer grew in their gardens. She never considered any of these tasks as work. She then would generously give away jars of dill pickles and homemade jams and jellies to family, friends and neighbors; another way she showed her love for so many.

A private funeral service, officiated by Rev. Gregory Passauer of All Saints Parish, will take place at Van Matre Funeral Home in Waterford. Burial will follow in Waterford Cemetery. All CDC guidelines will be followed.

In lieu of flowers, memorials may be made to St. Jude Children & Research Hospital, 501 St. Jude Place, Memphis, TN 38105.
If you knew Camille (or even if you didn?t), please say a prayer for her and wish her Godspeed.