It is with great sadness that we announce the passing of Timothy D. Reichart of Edinboro. Tim, born December 30, 1959, passed away on August 23rd after a lengthy and well fought battle with cancer. He was the son of Julie Reichart of Edinboro and the late Frank E. Reichart. 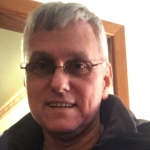 Tim was a graduate of General McLane High School and Edinboro University of Pennsylvania. After some time in Chicago, Denver and Tennessee, he returned to the Erie area and worked for Lord Corporation for just under 30 years. He was very much a family man and was a devoted father and grandfather. Beyond his love of family, he was an avid Pittsburgh Steelers fan and enjoyed riding his motorcycle, oatmeal raisin cookies and Diet Pepsi.

In addition to his mother, he is survived by his wife, Susan Vogelberger of Fairview, PA; his children, Meghan Jordan and her husband Michael of Seattle, WA, Kaitlin Reichart of Virginia Beach, VA and Robyn Reichart of Sacramento, CA; and siblings, Julie Gould of Edinboro, Frank Reichart Jr. of Cambridge Springs, and Deborah Testi and her husband Thomas of Fairview. He is also survived by two grandsons, Leo and Charlie Jordan, and many nieces and nephews. He was preceded in death by his father and sister, Linda Reichart.

In lieu of flowers, memorials may be made to the Kidney Cancer Association.

There will be a private viewing at the Van Matre Funeral Home in Edinboro on Wednesday, August 26. Friends may attend the graveside ceremony at the Draketown Cemetery in Edinboro at 11:00 a.m. on Wednesday.