Judy Ann Eastman, 66, of Edinboro, passed away September 15, 2020 at home surrounded by family and loved ones. She was born in Erie to Benjamin and Sarah Geer in 1954. She graduated in 1972 from Cambridge Springs High School and Crawford County Vo-Tech, where she studied commercial arts. She married Norman Eastman on July 14, 1979 and they had two daughters. 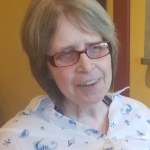 Judy enjoyed collecting Native American keepsakes, porcelain dolls, and record albums. She also loved to draw and decorate cakes. She had the pleasure of driving school bus for General McLane School District for 10 years, before retiring.

Judy is preceded in death by her parents Ben and Sarah Geer, her husband Norman Eastman, and a son-in-law Chad Stritzinger. She is survived by her daughter, Missy Stritzinger and grandchildren Dylan and Sara Stritzinger; and her daughter Jessica Murdock and son-in-law Josh Murdock. Judy loved her cat Frank and her grand furbabies, Shepard, Asha, Eli, and Luna. She is also survived by her sisters Debbie Brown (Ray), Vickie West (Chuck) and two brothers and many nieces, nephews and cousins.

Visiting hours will be at Van Matre Funeral Home in Edinboro on Saturday, September 19th from 2-4 and 6-8 p.m.