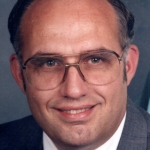 ??? Eugene, 80, of Cambridge Springs, was born on August 15, 1940 in Albany, NY, the son of the late Maurice Montgomery Kline and Hazel Elouise Campbell Kline.

He graduated from Edinboro High School in 1958, where he was on the Erie County Championship basketball team.? He was very active in his youth in the activities of the Washington Valley Christian Church.? It was in Sunday School and participating in Christian Endeavor that he fell in love with Ruth Ann Kerr.? In 1962, after graduating from Allegheny College, they were married for 44 years until her death on December 25, 2005.? They moved to Phillipsburg, New Jersey, where they both had teaching positions.? They became very active in the Methodist Church and sang in the church choir.

Eugene was accepted into a doctoral degree program at Iowa State University in Chemistry. In 1970, while in Ames Iowa, their cherished daughter,? Natalie, was born.? Upon receiving his doctoral degree in 1973, he obtained a faculty position at Tennessee Tech University teaching organic chemistry to pre-pharm and pre-med students.? Eugene also participated in coal-gasification research in North Dakota and prepared a study for the State of Tennessee on how over the counter drugs could produce meth, which resulted in legislation. He retired from TTU as a full professor in 2015. After retirement, Eugene was able to move from Tennessee to the family farm house in Pennsylvania.

He loved working with youth and his students.? He served as a basketball coach to a winning girls basketball team, an advisor to the Wesley Foundation youth group and sponsored the Chem-Med Club at TTU.? Eugene also served as the President of the Lions Club in Tennessee where he was awarded the Melvin Jones Fellow from Lion?s Club International. He was the President Tennessee Academy of Science and remained a member of the Masons in Phillipsburg, NJ.

Throughout his career, due to his love for teaching and his students, he won many awards such as Who?s Who Among American Teachers, Global Directory of Who?s Who, Strathmore Who?s Who, the American Registry of Outstanding Professionals, and the Tennessee Tech Outstanding Faculty Award. However, his most cherished awards came from his past students who had become successful medical doctors and pharmacists.? As one of is former students, now a physician, wrote to him,

I?ve been thinking and reflecting on what a fantastic student advocate, educational leader and wonderful person you were, both in and outside of the classroom. Hundreds of past students are where they are now in large part because of you and they have not and will not forget the role you played in their lives.

More importantly, he loved his family and loved being with them, especially his daughter, Dr. Natalie Stone and his grandson, Carter Stone of Saint Johns, Florida.? They will miss him greatly. He will also be missed by his brother Boyd Kline; his sister, Dr. Nancy J. Kline; his sister-in-law, Sarah Wolfrom;? numerous nieces, nephews and cousins.