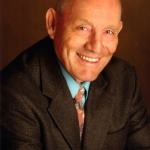 Jack grew up in Franklin Township and attended the Franklin Center one-room school house and graduated from Edinboro High School in 1954. He enlisted in the U.S. Air Force and was proud to serve his country for four years. After returning home from the Service, Jack helped his father with the family farm, and later purchased the Piefer Farm. He started his own dairy farm which he continued for 12 years. He later worked at Eriez Magnetics and retired in 1997 after 18 years. Jack was also a skilled carpenter and built homes and completed many building projects in the area.

A year after his retirement, Jack completed a goal on his bucket list to ride his bicycle across the country from Seattle, WA to Washington, DC. He loved to ride his bicycle and did it often with his wife, Judy and his brother, Roland ? taking week long tours to other States or just around hilly Edinboro.

Jack was a member of the Elk Creek Grange #997 for 21 years, and a member of the Pomona Grange #4. He enjoyed volunteer work– ringing the bell for the Salvation Army, working at Wesley Woods, and doing projects and repair work for local churches. He took great pride in maintaining his well-kept and beautiful property and gardens.

Many will remember Jack for his strong Christian faith and how he lived out his life as unto the Lord.

He was preceded in death by a son, William John Sheffer, his brother Roland Sheffer, and brother-in-law Bill Borland.

Friends are invited to call at The Federated Church in East Springfield on Wednesday, October 7th from 10:00 a.m. until time of the funeral service at 12:00 noon. Rev. Ed Huntley will officiate. Committal service and burial will follow at 3:00 p.m. at Sterrettania Cemetery.