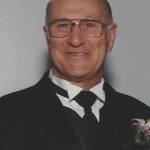 A United States Army veteran and computer engineer, James enjoyed spending time with his family and hunting in Colorado. He and his wife Darlene Carrie O’Conner Gaines, whom he married June 12, 1974, were blessed with two sons, nine grandchildren and two great-grandchildren.

Friends and family may call on Friday, November 13th from 2-4 and 6-8 p.m. at the Van Matre Funeral Home in Waterford. The funeral service will be held there Saturday morning at 11:00 a.m. with the committal service and burial following at Phillipsville Union Cemetery.