Wayne Wright, 76, of Cambridge Springs passed away at Wesbury on December 6, 2020, after a period of declining health. Wayne was born on May 15, 1944, in Union City, the son of the late Howard Wright and Minnie Smith Wright. He joined the United States Army and served in Alaska working with the U.S. Army Corps of Engineers from 1967 to 1969. Wayne worked for General Electric in Erie retiring after 35 years. On January 13, 1989, he married Beverly Ann Blystone Farrell. He enjoyed tractor pulling, picnics, camping, 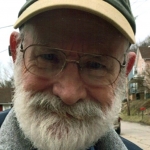 hunting and baking the best brownies. Wayne was known as a Mr. fix-it who could build anything from pallets. He was involved with the Bodacious Bunnies 4-H program; and as a member of the American Rabbit Breeders Association, he raised and showed American Sable rabbits. He thoroughly enjoyed the Crawford County Fair and assisted with the quilting display for many years.

He was preceded in death by siblings: Ray, Howard, Rosemary, and Ruth Wright.

A service to celebrate Wayne’s life will be held at a later date.

In lieu of flowers, donations may be made to Hospice of Crawford County, Wesbury Memory Support, or the Alzheimer?s Association.