Thomas Newell Dodd, 86, of Edinboro, passed away peacefully on January 22 at Edinboro Manor. He was born May 9, 1934 in Jamestown, NY to George Davis Dodd and Flora Newell Dodd. He spent his early days in Westfield, NY and later started a family with his first wife, Sara, in Northeast, PA. Later, the family moved to Chambersburg, PA 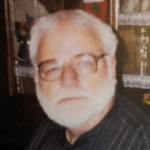 He moved to Bradford, PA in the early 1980?s, where he met his wife, Sally, of 38 years. They moved to Edinboro, PA in 1983, purchasing and remodeling the former Baptist church on Waterford street into an eight unit apartment building.

Tom was a veteran of the U.S. Army and worked a variety of jobs throughout his life. He worked in a bowling alley, a forge, and drove a route for Coca Cola. In the 1970?s he joined a Pizza Hut Franchisee, Atlantic Enterprises, working his way up to store manager. Later, Tom was promoted to VP of Real Estate and charged with building Pizza Hut restaurants throughout Central and NW Pennsylvania, including the one in Edinboro. Before retiring, Tom was the Building Superintendent at Edinlake Apartments in Edinboro, PA.

He was always known as a hard worker, jack of all trades. He took great pride in his work, especially the restoring of an old cottage on French creek with his two sons. Many a family gathering were hosted there by Tom and his wife Sally, including one of the large Newell family reunions.

Tom liked antiquing and going to auctions with Sally. He was an avid WWII buff, as well as other history. His love for dogs led him to adopt many over the years from local shelters, always picking the hard cases that were less likely to be adopted. He will be fondly remembered as the family ?Dog Whisperer.?

At the family?s request there will be no services.

In lieu of flowers, donations can be made in his honor to your local animal shelter.