Max Ferris, 83, of Cambridge Springs passed away on January 1, 2021, peacefully at his home in the same bedroom he was born in. Max was born on November 6, 1937, in Rockdale Township, the son of the late Roy and Florence Finney Ferris and spent his entire life at Ferris Corners. He graduated with the Cambridge Springs High School 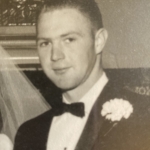 class of 1955, and on November 11, 1961, he married Audrey Wargo, and she survives. Max lived a full life, remaining active in sports. He played basketball, baseball, and softball well into his thirties. He also loved baseball and was actively involved with the Cambridge Springs Little League Association serving as commissioner and coach of both the little and big leagues for several years. For a number of years, he was the voice of the Cambridge Springs football team. Max was an avid golfer playing at least twice a week for most of his life. His best moments on the course were when he scored two hole-in-ones. Many of these experiences throughout his life were shared with his two best friends of more than sixty years, Perry Darling and Sam Spencer. He was a faithful Cleveland Indians, Browns, and Cavaliers fan- never missing a game on television.? Max was known as being his children and nephew?s greatest fan.? He traveled with his wife, Audrey, across many states to see his son, Mike; daughter, Michele; and nephew, Randy play and coach. There is no doubt his fondest and proudest moments were watching and cheering them on and celebrating their accomplishments-especially their hall of fame inductions.

Max served for two years in the PA National Guard and worked at White Engineering in Cambridge Springs and Apex Corporation in Saegertown. He was then self-employed and later became a bus driver for Penncrest School District. He especially enjoyed driving the sports teams to their games. For twenty-six years, Max was a Rockdale Township supervisor along with his good friend, Jim Morton. Max attended the Millers Station United Methodist Church and was a former trustee.

In addition to his parents, Max was preceded in death by sister, Pauline Burnley, and her husband, Robert; brother, Donald Ferris; nieces; Cindi Mckissock and Patti Daniels; and sister-in-law, Mildred Koket, and her husband, John.

Friends are invited to call at the Van Matre Funeral Home in Cambridge Springs on Wednesday, January 6, from 1-3 p.m. A funeral service will begin at 3 p.m. with pastor Betty Hollabaugh officiating. Interment will follow at Millers Station Cemetery.

Memorials may be made to the Cambridge Area Little League or Cambridge Springs Volunteer Fire Department.