Virginia “Ginny” Orr, went to dance with Park again on January 4, 2021. She was a resident of Waterford since a young age and met Park at the skating rink. They were married for 36 years until his death. Ginny worked for Earl Brace and Sons for many years and then for the Fort LeBoeuf School District. Many people will remember Ginny from 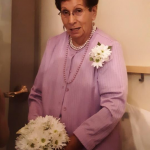 LeBoeuf Lanes and seeing her walking many miles around Waterford.

Ginny will be joining her husband and four of her sisters: Lucy, Kate, Loretta, and Bobbi; and one great-grandchild.

A celebration of life will be held at a later date.