William Earl Scheffner, 76, of Cambridge Springs, passed away on January 1, 2021, at his residence. Bill was born on December 27, 1944, the son of the late George J. Scheffner and Margaret M. Robertson Scheffner. He was a graduate of Cathedral Prep High School and John Carroll University in Cleveland and 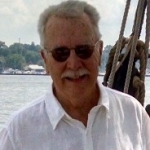 entered the U.S. Air force in 1966, serving for four years.? On December 31, 1993, Bill married Delores Kaczor. He had worked as a counselor at Stairways in Erie for four years, as a Certified Financial Planner for ten years and as a corrections counselor at SCI Cambridge Springs for over ten years, retiring in 2005.

In addition to his parents, he was preceded in death by brother, George (Corky) Scheffner, Jr.

A private memorial service will be held at the Van Matre Funeral Home in Cambridge Springs at a later date.