Loraine E. Fox, age 88, longtime resident of Waterford, died Tuesday, March 23, 2021 at UPMC Hamot after a brief illness. She was born in Ingomar, PA on May 11, 1932, the daughter of the late Samuel and Dorothy Wooster Faulhaber. She was married to Clarence D. Fox Jr. who preceded her in death in 1973. 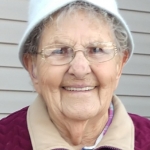 Loraine was a very social person who enjoyed her many friends and the community of Waterford. For almost 25 years, she worked in the Fort LeBoeuf Middle School cafeteria, retiring as the head cook, and many will remember her for the column she wrote in the Waterford Leader entitled “Fox’s Findings”. She enjoyed going to the Pleasantview Garden Club, the Union City Senior Center, the Waterford Golden Agers, and parties with friends.

It was common to see Loraine enjoying the view at Lake LeBoeuf, but most of all, she enjoyed her home, and her yard and gardens. After almost 25 years with her husband, Loraine had a close friendship with Jim Burawa. They were companions for 19 years and were able to travel to many places.

She was preceded in death by her husband Clarence “Jr.”, her companion, James Burawa; sister Patricia Miller, brother Samuel Faulhaber; and several brothers-in-law.

Friends may call at Van Matre Funeral Home in Waterford on Thursday evening from 5 – 8 p.m. The funeral service will be there Friday morning at 10:00 a.m. officiated by Deacon Tom McAraw from All Saints Church. Burial will follow in Waterford Cemetery.

In lieu of flowers, memorials may be made to Kiwanis of FLB, Waterford Food Pantry, or Stancliff Hose Company.